How Our Power Stations Work 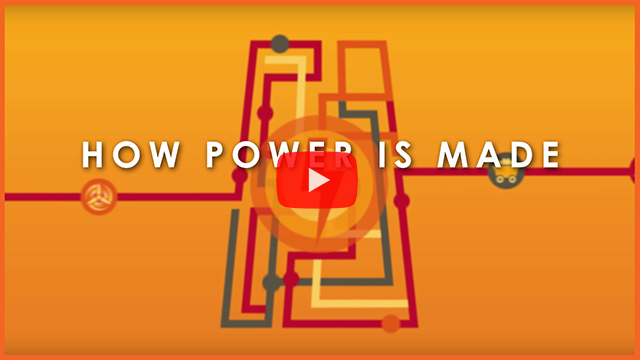 Battery energy storage systems give us flexibility. They allow us to adapt our power supply during spikes in supply and demand. They also support intermittent sources like wind and solar by storing some of the power they generate for later.

Battery storage has more flexibility and can respond quicker to short-term power fluctuations than some of the conventional generating units that are currently on the system. However, we cannot rely on this technology alone to power the province as it does not act as 24/7 baseload power.

Biomass electricity generation can come in many forms. The most common method is as simple as burning wood or wood pellets to heat a boiler steam to turn a turbine.

Wood can also be combined with coal. Other biomass methods include: heating biomass in tanks with no oxygen to create a bio-oil, which can then be burned like gasoline; or using corn and wheat to create a combustible fuel called ethanol. Bacteria can even break down manure and plants like a compost to create a flammable gas, which can be burned to generate power.

In a thermal power station, fuel (coal or natural gas) is burned in a boiler to convert water to steam.

The high-pressure steam is directed into a turbine, which turns the turbine shaft. This shaft, connected to an electrical generator, produces electricity as it turns. A condenser converts the spent steam from the turbine back to water that is reused in the boiler. The condenser cooling water comes from the reservoir and is returned for reuse.

The City of Humboldt has partnered with us for a demonstration project to test a CHP system at the Humboldt Aquatic Centre. In traditional gas turbines, most of the energy potential of fuel is wasted when hot exhaust gases are released into the atmosphere. In cogeneration facilities, the exhaust gases from each gas turbine are captured and redirected into a waste-heat recovery boiler to produce steam. This steam is used to power a steam turbine, which generates additional electricity.Additional steam is also available for adjacent mining and other applications.

In a cogeneration facility, significantly more potential energy of natural gas is converted into electricity and steam than what is achieved by conventional power stations. Greenhouse gas emissions are also significantly lower than a similarly sized coal-fired power station.

Geothermal power generation passes hot water 138 through an exchanger and creates steam and drives a turbine to produce electricity.

If you’ve ever had the luxury of soaking in a hot spring, you’ve experienced geothermal energy. The further you travel toward the Earth’s core, the hotter it gets.

Hydroelectricity is created by falling water. Water from reservoirs flows through the penstocks that connect the reservoir to the station. The water turns a hydraulic turbine, which rotates a generator and produces electricity.

Once the water has been through the turbine, it is directed into the exit, called a tailrace. The water is then returned to the river below the dam where it continues downstream toward its natural destination. By holding water in the reservoir, the potential for immediate electricity is stored. Excess water from heavy rains or spring run-off can be released from the reservoir through spillway gates, if required.

In a natural gas power station, simple cycle gas turbines inject compressed air into a combustion chamber, along with fuel, to produce a high pressure hot gas stream that is expanded in a turbine to produce electricity. The expanded gas products are exhausted directly to the atmosphere.

Simple cycle gas turbines, also referred to as open-cycle gas turbines, have the ability to be turned on and off within minutes. For this reason, these turbines are typically used to supply power during peak loads, such as mornings and suppertime. Most of the energy potential of fuel is wasted with simple cycle gas turbines when hot exhaust gases are released into the atmosphere. In combined cycle facilities, the exhaust gases from each gas turbine are captured and redirected into a waste-heat recovery boiler to produce steam. This steam is used to power a steam turbine, which generates additional electricity.

Right now, we don't have any nuclear power in the province. But we're looking into the potential to add it into our supply mix by the early 2030s.

Solar power uses panels to capture and store energy from the sun – it’s one of the cleanest technologies out there but is still very expensive and, of course, only works when the sun is shining.

Solar power alone isn’t enough to power our province, but it’s an option for homes and businesses. Check out our Net Metering Program and Small Power Producers Program for more information.

Wind turbines capture the kinetic energy available from wind and convert it into electrical energy. Large blades mounted on tall towers rotate a shaft connected to a gearbox and generator to produce electricity.

The clean electricity created is then sent to a transmission line connected to the provincial grid, supplying electricity to homes and businesses. Among other factors to consider, wind turbines are erected in areas of consistent wind and with consideration of existing transmission lines to transport the electricity to where it is needed. Turbines usually operate with wind speeds between 15 and 90 kilometres per hour. They cease operating when temperatures fall below -30°C.